Go see 'The Blind Side'

Share All sharing options for: Go see 'The Blind Side' 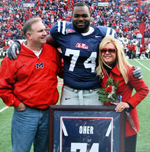 Rocky. The Natural. Hoosiers. Field of Dreams. Million Dollar Baby. Remember the Titans. Sports have given us great movies. Some have been uplifting, others depressing. But whether they've been about boxing or baseball or football or basketball, these sports films that have broken through have resonated because they've shown how sports teaches us about life.

Enter The Blind Side. I went into it with high expectations, having seen the box office receipts go up in its second weekend (very rare). My expectations were exceeded. In case you didn't know, it's the story of now-Baltimore Raven Michael Oher and how the kindness of a family he didn't know gave him the strength to rise out of the projects. Corny, right? It is. It's also a well-crafted, well-executed film about selflessness and sacrifice.

The football is pretty good. I often complain about the sports in sports films: You can tell someone who doesn't have a clue about sports is directing when you watch movies like High School Musical and Any Given Sunday. It's a joke. But in The Blind Side, the filmmakers have a clear understanding of the sport of football and how it looks to the viewer.

Hell, they got Nick Saban to put on a purple-and-yellow tie and pretend like he was still at LSU; That's gotta be worth something!

Just one note of caution: Don't judge the film by the little kid in it. To make the movie palatable to women as a date movie, the filmmakers had to put (just like Remember The Titans) a 10-year-old kid in the role of an adult. The kid knows the intricacies of blocking schemes and has the vocabulary of a 50-year-old. While the women next to you are applauding and saying, "Oh that kid is so cute," just roll your eyes and let him roll of your back. You'll enjoy the movie much more not trying to resist.

When awards season comes around, I do think it could be in the mix for a couple. The writing is superb. Sandra Bullock (gulp) actually could get a Golden Globe nomination for her role. To have a crowd-pleaser that is so well-done on so many levels is rare. Don't miss it.