Share All sharing options for: NFL Week 9: The season is wide open

Colts, Saints stay unbeaten at 8-0, but no team is dominant. The Bengals and Bucs show that orange rules, Andy Reid is a bonehead, hot player of the week and the Giants continue to fall apart.

We have reached the halfway point of the NFL season and one thing is clear - there is no dominant team and anyone who tries to pick the Super Bowl teams is crazy.

I am a huge Colts fan and am thrilled they are 8-0, but they keep walking a tightrope, needing another fourth-quarter comeback to beat the Texans, 20-17. The Colts got a gift when the reliable Kris Brown missed a 42-yard field goal on the game's last play that would have forced overtime.

By beating the Texans (5-4), the Colts all but clinched the AFC South, but have a killer schedule with games against the Patriots, Ravens, Texans and Broncos in the next five weeks. The Colts have lost three defensive starters for the season and have little depth, so any more injuries could cripple them in the playoffs. Plus, they can't run the ball when it matter most.

I also saw the dumbest play call I've ever seen this decade's Colts team run - a wide receiver reverse pass by Reggie Wayne that was intercepted. The play had no chance from the start and instead of just throwing the ball away, Wayne threw a marshmallow that was easily picked off. You have Peyton Manning as your QB and you have your best receiver throwing? Weird. Said Wayne:

"My fault. I was trying to throw it out of bounds. ... Next time, it's going to the blonde in the first row."

Right now, I rank the Colts and Patriots 1-2 in the AFC, so next week's game will tell us a lot. Behind them I put the Steelers and Bengals, with the Broncos, Chargers and Texans a step below that. But give me two weeks and this can all scramble.

Historic: Rookie Colts coach Jim Caldwell became the first NFL coach since Potsy Clark in 1931 to win his first eight games. Clark coached the Portsmouth Spartans, a team I never knew existed until Sunday. The Colts have also won 17 straight regular season games, but with the Patriots up next, No. 18 will be very, very tough.

Still rolling: The Saints are the league's other unbeaten team, but like the Colts, they are flawed. New Orleans spotted Carolina 14 points, but needed a fourth-quarter comeback to beat the Carolina Panthers, 30-20. This is the second time in three weeks that the Saints have spotted sub-.500 teams double-digit leads.

Drew Brees has committed seven turnovers in the last three weeks, and while the Saints won all three, that is not the kind of play that will be successful in the playoffs. In addition, the Saints' defense has scored eight touchdowns this season; defensive TDs always contain a large amount of luck (the ball bounces funny or the receiver falls down etc.) and those kind of breaks often disappear in the postseason; just ask the 2008 Tennessee Titans.

All that said, the Saints have the easiest schedule of any team down the stretch, so a playoff bye would appear a lock, Unlike the Colts, the Saints play in a fairly easy conference, so they have a better Super Bowl chance than Indy.

Turnaround: Five weeks ago, fans in Dallas wanted Wade Phillips fired and Tony Romo benched. Now, it's hard to believe, but the Cowboys are alone in first in the NFC East after winning their fourth straight game, 20-16, at Philadelphia. Last season, the Eagles beat the Cowboys by 38 at home, so Sunday night's win was huge for Dallas. Romo sucks in December and January, but he's won his last 13 November games.

All of a sudden, Dallas has the third-best record in football. I am still not sold on them or Romo, but prop to a team that a lot of people wrote off.

In the NFC, I rank the Saints and Vikings as 1-2, followed by the Cowboys and Eagles, with the Cardinals, Falcons and Giants decidedly below.

Challenged: Somebody needs to take the red challenge flag from Andy Reid. The Eagles coach continues to be the worst game manager (among quality coaches) in the league. He used two ridiculous challenges against the Cowboys, both that failed and cost the Eagles two timeouts. Being out of timeouts allowed the Cowboys to run off the final 4:27 of the game by getting two first downs.

It also made no sense for Reid to kick a field goal facing fourth-and-10 from the Dallas 34 with 4:33 to go. Being out of timeouts and being down a touchdown, the three points did not help the Eagles at all. Reid got his three points, but then Dallas milked the clock without Philly running another play. Going for the first gave the Eagles their best chance, not kicking. It's amazing this guy has had has much success as he has, because when I watch an entire game, Reid's decision making always baffles me.

Orange crush: Sunday was a great day for orange-clad teams. The Cincinnati Bengals (6-2) manhandled the Baltimore Ravens, 17-7. After starting 3-0, the Ravens have lost four of five and are in serious danger of missing the playoffs. I keep thinking the Bengals will come back to Earth, but they have beaten the Steelers and swept the Ravens and are playing solid defense.

The other orange winner was the Tampa Bay Buccaneers, who shocked Green Bay, 38-28, for their first win. The Bucs wore their creamsicle throwback uniforms and it seemed to help.

The Packers were my preseason NFC champ, but they look pathetic. They are 4-4, but the four wins are over teams a combined 7-24. They will be lucky to finish at .500. 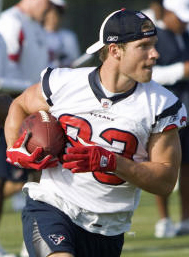 Hot player of the week: Kevin Walter, 28, wide receiver of the Houston Texans, is smoking hot (photo left). Handsome, lean (6-3 and 218) with great hands. And the camera always finds him on the sidelines without his helmet at some point.

Free fall: The New York Giants started 5-0, feasting on the likes of Washington, Tampa Bay, Kansas City and Oakland. But since they started playing legitimate NFL teams, the Giants have fallen apart. The worst might have been Sunday's 21-20 loss to San Diego. The Giants led by six and the Chargers had to score a touchdown in less than two minutes. San Diego made it look easy -- eight plays, 80 yards and the game-winning TD pass from Philip Rivers to Vincent Jackson. At 5-4, the Giants are two games behind in the division and are playing with zero confidence. The Chargers, meanwhile, are a quiet 5-3 and remain a threat in the AFC.

Odd team: Go figure the Arizona Cardinals. Last year, they were virtually unbeatable at home and couldn't win on the road. This season? By beating the Bears, 41-21, in Chicago, the Cardinals are 4-0 on the road and 1-3 at home. The Cardinals are one of those teams that will be christened the "team no one wants to play" if they make the playoffs; they are as capable of scoring 40 as giving up 40.