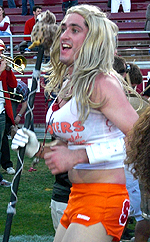 In the Bay Area for the weekend, I decided to head to my alma mater Stanford for the big game against Oregon. And what a game. Stanford held on for the big upset of the top-10 Ducks, 51-42.

But there were some interesting notes after the game. It was my first time "storming the field" after a football game. I got to rub elbows with some of the players (and in Andrew Luck's case, literally rub elbows) and watched a handsome, excited coach Jim Harbaugh carry his baby triumphant into the tunnel. But most of my time was spent watching the best band in college football: The Leland Stanford Junior University Marching Band.

LSJUMB is a different kind of band. They don't worry about playing marching tunes...or marching, for that matter. At the outset of their halftime show, they simply sprint onto the field, running out aimlessly until it's time for them to get into formation. This week, they formed a closed hand after referring to someone being dateless (I took it as a reference to masturbation). In the past, they've gotten into trouble with Oregon (for simulating the murder of a spotted owl; you can even see a small spotted owl on the staff of the drum major in the pic above) and Notre Dame (for references to Catholicism). They focus on fun and entertainment instead of boring scripted marches.

Which brings me to the drum major. How many schools let their drum major dress up like a Hooters girl, complete with double-Ds and flowing blonde hair? That's right: Only Stanford (above).

And none of this, of course, even addresses the Dancing Tree.