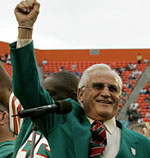 One of the more annoying "traditions" in the NFL is the 1972 Miami Dolphins popping champagne corks as soon as the last team loses each year. This way, the Dolphins can keep their distinction of being the only team to have gone through a season unbeaten (17-0).

The coach of that team, Don Shula, admits he hopes that the Indianapolis Colts and New Orleans Saints (both 13-0) each lose at some point this year.

"They're a legitimate concern," Shula said of the Colts and Saints in an interview with the Fox affiliate in Orlando. "I'm rooting secretly inside that somebody beats them."

In the next breath, Shula tried to walk back his comments.

"We're very proud of that but we're not a bunch of angry old men that sit around and can't wait for that last undefeated team to get beat," Shula said. "If somebody breaks that record . . . I'm going to call that coach and congratulate him."

He'll call the coach -- how gracious of him. The '72 Dolphins, as a group, have always struck me as petty for their open rooting against any unbeaten team. They act as if another unbeaten would somehow diminish what they accomplished, but in my mind it would do the opposite and serve as a reminder of how rare a feat it is. They wouldn't lose their Super Bowl rings or have an asterisk placed next to their name.

Two years ago, I rooted against the Patriots (who wound up 18-1), because they are the NFL's Evil Empire. But even then a part of me would have been happy to have seen the champagne corks stay intact on the Dolphins' bubbly. For Shula and those Dolphins, a Saints-Colts Super Bowl in which both are 18-0 would have them rooting for a comet to destroy the Earth seconds before the final gun sounded.