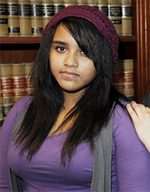 While some people are talking about suspending Tiger Woods from golf (insane, but true), I have someone I'd like to ban from sports forever. Alina Cerda is a 15-year-old girl who broke her ankle sliding into a base during some softball drills this year. She's now suing the City of New York and her coach claiming she was never taught how to slide into a base and that the coach wasn't supervising the drill at the time. She says she's been playing softball since she was 7, which means that for 7 years she was never taught how to slide.

It's too bad she missed the season and needed some screws to fix her ankle, but injuries are a part of sports. And if she can't accept that (which she clearly hasn't), she should be banned from every park and every gym in the city.