Looking for a date for NHL's Winter Classic

Share All sharing options for: Looking for a date for NHL's Winter Classic 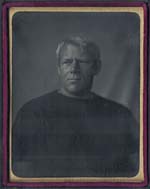 What do you do if you have two tickets to the NHL's Winter Classic and don't have anyone to go with? Well hockey guru Peter Hay Halpert has two tickets to the Jan. 1 outdoor game between the Philadelphia Flyers and the Boston Bruins at Fenway Park. His straight buddies can't go because their wives won't let them, and his gay friends don't have much interest in hockey. So Peter came to Outsports to find a date!

Peter runs an art gallery in Chelsea featuring some fantastic photography (I first met him at a reception he held for Brian Orter's Oarsmen series). He's a sports nut who has played in the Toronto Maple Leafs organization and has coached players from high school through the Olympics.

So, who's he looking to take to the game?

A young(ish) guy who is really in to hockey, with whom I can develop some chemistry, and who might like to go see the game with someone who really knows hockey.

Peter lives in New York, is a season ticket holder for the Flyers, and is traveling to Boston for the game: So, wherever you live in the Northeast megalopolis, or if you just want to connect with a big hockey (particularly Flyers) fan anyway, email Peter at phhphoto@aol.com.