There was a weird segment on Fox's pregame show (video below) where the panel was discussing a picture of Howie Long naked when he was a player for the Raiders. The context was comic Frank Caliendo's NFL picks. He was doing a lame impersonation of George W. Bush doing a standup routine and mentioned a Raider player who lost his pants a week ago.

"I haven't seen a pantless Raider since ... I gotta go back to Howie Long," Caliendo said as they showed this image: 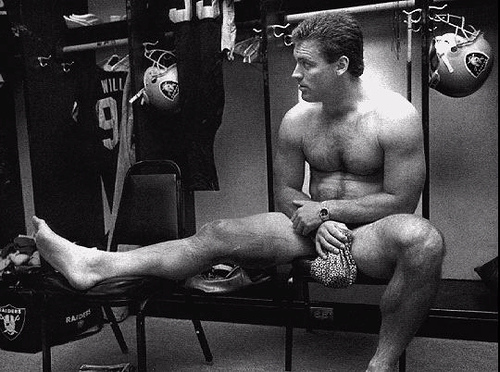 When Caliendo ended, the panel then tittered about the picture, with Long saying, "it's Frank's screensaver, which scares me, Frank." More tittering ensued, then Curt Menefee said Long looked like Levi Johnston. To which Long replied, "I don't know about you folks, but I'm a little uncomfortable." Menefee then backed off by saying, "it's Terry [Bradshaw's] screensaver, so I just looked at his computer."

It was all rather sophomoric. Brent, our longtime photographer who alerted me to the item, had this take: "To me it perfectly illustrates that whole vibe that still predominates when you have men in a physical sport being around each other naked, and yet if anyone mentions the obvious, everyone has to stamp it out immediately."