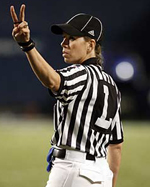 This weekend Sarah Thomas became the first woman to officiate a college bowl game, the Little Caesars Pizza Bowl (Marshall beat Ohio, 21-17). The Mississippi mother of two is in her first season officiating college football and earned high enough marks to place her in a bowl game. Thomas said:

It was a little uncomfortable at first because you don't really want to make it a big deal, but my husband kept telling me that it's something I should embrace because it's helping open a door that little girls probably thought was forever shut for them.

While sports are far behind the gender equality that so much of corporate America has embraced, it's good to see another door opened for everyone who's willing and able to do the job. Hopefully an openly gay man will be next.