Share All sharing options for: Texas lucks into BCS title game against Alabama 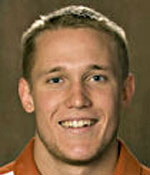 If ever a heavy favorite deserved to lose a game, it was Texas against Nebraska. But thanks to a lousy kickoff by Nebraska, a dumb roughness penalty and instant replay, the Longhorns beat the Cornhuskers, 13-12, to win the Big 12 championship and a spot in the BCS title game against Alabama. The Longhorns survived the worst clock management imaginable and I hope Texas quarterback Colt McCoy gives the replay official a giant hug for saving his burnt orange ass.

Nebraska, 14-point underdogs and with the worst offense I have ever seen on a good college football team, took a 12-10 lead with less than two minutes left. On the ensuing kickoff, Nebraska's kickoff man screwed up and kicked it out of bounds, giving Texas the ball at its own 40. On the next play, a completed pass, the Longhorns got 15 yards tacked on when receiver Jordan Shipley was horse-collared.

The Longhorns were in field goal range but almost never got a chance to kick. That's because McCoy screwed up and took his time running to the sidelines and throwing the ball away as time was running out (Texas had a timeout left). The ball sailed out of bounds and hit the ground as the clock hit :01. When the clock kept running and went to :00, Nebraska thought it had won, but the replay official ruled there was still a second left (it appeared to be the right call, though it was extremely close). Texas' Hunter Lawrence kicked a 46-yard field goal and saved McCoy from committing one of the biggest blunders in college football history.

After the game, McCoy said "there were 15 seconds left" and he threw it out of bounds figuring there would be one or two seconds left. In actuality, there were only six seconds left when the ball was snapped. It's stunning that McCoy could have messed up so badly and that Texas coach Mack Brown did not call a timeout when the clock got inside 10 seconds and it was obvious that any play could run out the clock.

So, Texas gets a gift for the ages and still likely gets to play for the BCS title when the polls come out Sunday. That in a nutshell is the embarrassment that is major college football. Alabama (which crushed Florida), Texas, TCU, Cincinnati and Boise State all finshed unbeaten but the awful BCS system will likely decree that the Tide and Longhorns are more "deserving" than the other three less-than-big-name teams. The winner of Texas-Alabama will win the BCS title, but any claim of being "national champions" will ring hollow if any of the other three unbeatens win their bowl game.