David Stern says a woman will play in the NBA

Share All sharing options for: David Stern says a woman will play in the NBA 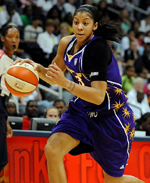 In 1979, Ann Meyers Drysdale became the only woman to sign an NBA contract (she did so with the Indiana Pacers). She never saw the regular season, but the groundwork was set. Thirty years later, no woman has gotten closer to an NBA roster than Drysdale. But David Stern thinks someone may in the next 10 years.

I don't want to get into all kinds of arguments with players and coaches about the likelihood. But I really think it's a good possibility.

It would be quite a stunt, throwing a woman into an NBA game. The problem is, this time it wouldn't be a woman in her prime going against a hasbeen. The playing field would be even, and it would be ugly. An anonymous GM put it perfectly:

I think they have the necessary skill sets: If you give me the best of the best in the WNBA and put them on the (free throw) line with the best of the NBA, I think you'll see they shoot the ball as well as men. But think about the overall speed, athleticism and strength (in the NBA). They can't take the pounding, the wear and tear, the quickness, the strength. It's not possible for them right now.

Take Candace Parker of the Sparks. She's big, physical, and has some of the best skills and talent in the WNBA. Can I imagine her keeping up with LeBron James? Not in a million years. Again, his strength, speed and agility are too great. But that's not what we're talking about; We're talking about making a roster. Milwaukee's Michael Redd is tied for 150th in points per game in the NBA. Redd's 6-foot-6, 215 lbs. Could Parker hang with Redd? She just doesn't have the physical strength, speed or agility to do it.

I'm also thinking about how she'd fit onto the team. When we talk about gays in sports, we always have to talk about the locker room. Well I can't imagine Parker even being allowed in the locker room. But maybe I'm wrong; Maybe the team would have her shower with her teammates. Or shower after them? I don't know, but I have to believe that, more than having a gay guy there, having a woman in the locker room would be particularly awkward.

I'd love to see someone do it. I'm somewhat fascinated by the concept of men and women competing on the court and on the field. I think I know what would happen, but you never know for sure; And I'm curious to see how it would play out.

Is there a woman right now in basketball who'd be a better NBA fit than Candace Parker? And what do you think would happen if she got thrown into a Cavs-Celtics matchup?