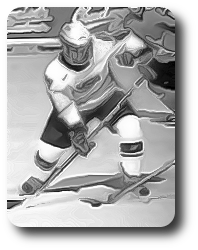 One of the best things about the Internet for gay people is the ability to reach out and connect, especially for young people still in the closet. A new blog, a gay hockey kids life, fits this mold well and is my favorite new blog. I urge people to check it out.

Mikey, the blog's creator, is a 17-year-old senior at a suburban Minneapolis high school who plays on his school's hockey team. He started the blog less than a month ago. I happened to stumble across it from another link and am hooked. Mikey is very funny (I can imagine him rolling his eyes as he writes), self-aware and observant. The blog is often humorous, sometimes poignant but always engaging. For someone who uses the word "boring" a lot, Mikey sure makes his life sound interesting.

His writing style takes a bit getting used to. He texts more than writes. Everything is in lowercase, punctuation is sparse and common words are spelled in text shorthand ("ne" for "any," "proly" for "probably"), but one quickly gets in the rhythm.

Mikey told me via e-mail (in his same texting style) that he started the blog after "i started reading a few other blogs by some other gay kids in the closet and it seemed like a cool way to sorta out urself a lil bit to people who dont know u. plus since i started doin this i have heard from a few other gay kids playin team sports and i really dint think there was neone else like me out there till recently and im sure that there are other kids who think the same thing."

He's only out to two people (his younger brother and a friend) and since he has college hockey aspirations, he plans on staying closeted for now. "But i hate it everyday havin to lie to everyone," he wrote me. He said he thinks some teammates would be OK with him being gay, but that it would be hard to be out and play. I asked him if he hears anti-gay comments and he said players "always are sayin something bad is gay, n callin each other fags or homos or gayboys or shit like that as like a major slam."

What most shines through on the blog is Mikey's love of hockey. He has been skating since he was 3 and playing since he was 5. One of his posts is a terrific primer he calls Hockey 101, which explains the sport to the uninitiated.

I find myself rooting for Mikey, on and off the ice, and hope he can work through the frustration of being a closeted jock. We have been writing about this for years on Outsports, and it's people like Mikey who show the importance of people reaching out to each other. Despite him thinking he is being weak for staying closeted, he is dealing with the circumstances he is in, and his writing has the potential to make a difference to others. I hope others in his situation check out his blog and drop him a line.

I wanted to share some of my favorite passages from Mikey's blog:

ive pretty much known i was gay for awhile but tried to ignore it for a long time but its just hard to do it. i told [a friend] and my lil bro this summer and there the first to know bout me, i wish i could tell everyone but im chicken and scared that bein out would screw up chances to play hockey after hs. it toly sucks cause like everyday i lie to everyone i know and love and that just sucks bigtime. i wish i was strong enough just to tell people but im not and i hate that bout me too ... being a weak liar sucks. im like the only kid i know not havin ne sex at all but other than gettin sucked by two girls last year im not and that sucks too. all the guys i like are straight as far as i know but its sucky cause no one knows or suspects im gay either so who knows they could be too.

had a decent time [at a party] till this girl toly started hitting on me and pretty much wanted to hook up. this is why i hate these things cause i gotta come up wit some lameo excuse why i cant and it always sounds stupid and then the girl ends up pissed at me. i always hear that gay guys have tons of friends who are girls but i dont at all, they all either ignore me or are pissed at me .... sucks

On dealing with sleep accommodations with his team during a tournament:

we share rooms when we travel and they cram 4 of us in one room now to save money so gotta share a bed. i know people wanna hear that i fell asleep and woke up and this toly hot kid i play wit was suckin on my dick, but i gotta report no such luck. i mean the hot kid part is true (i mean tons of the kids i play wit r hot but i try not to think bout it) but the whole rest dint happen. when i have to share a bed i sleep like crap huggin the edge of the bed cause im afriad ill wake up spoonin the kid and he'll freak out cause i got my boner in his ass.

it basicaly sucked ... i mean some cool effects but the story was sorta stupid and i dint really care bout lots of the characters so i was sorta happy when some of them died.

hey im in history rite now, and my teacher gave us time to go to the library and do some searching to figure out what historical movie we want to write a paper on ... im thinking the 300. he said it will be good for us to get used to using google. im like wtf who is he talkin to, like any kid in the class doesnt know how to use google. so of course im not gonna do that im gonna write on my blog instead, since im sorta familiar wit google and how to search for porn, ooops i mean historical stuff.

On spending a post-church breakfast with only adults, including his parents and grandparents:

not sure if neone elses mom does this, but shes all like hey mikey this lady is best friends wit the daughter of the woman who cut ur hair when u were like 5, remember her, well shes got a girl ur age who u should talk to sometime .... yea ill pass on that, and pass the syrup.

On his relationship with his dad:

my dad and i used to be close when i was little but over like the last 3 or 4 years it seems like he toly focuses all his pride and attention on my older and younger bro, and i just get the crap. i just want him to be proud of me and i never ever see it from him. ... after [some success], i texted him bout it and got nothin from him, no congrats nothing. i even asked my mom if he got the message and he did but he dint say nething. ... so i mean i dont hate the guy, im just tryin not to care cause everytime i do i get hurt more.

On his hockey idols:

some of my hockey idols are old school bobby orr a dman who changed the position by becoming the first offensive dman .... i have his autograph and met him twice and hes by far my biggest hockey idol even though i only have seen him play on like youtube. i always loved joe sakic, chris chellios, thomas vakek, chris pronger, and am huge brent burns and miko koivu fans. someone asked about other guys, like sid the kid. hes amazing but a lil bit too whiny for me.

On his hockey gear

mine weights like 75 pounds .... ohh and it all smells really really bad, way worse than any other sport, i dont know why but its bad. we have to keep our stuff in the garage cause my mom wont let it in the house. i also always have 4 sticks with me, all taped up (the blades and the shaft) exactly how i like em. they break about once every 2 weeks. (bet u thought i was gonna talk bout the other kinda shaft here, sorry to disapoint u)

Update: Mikey did a Podcast with BenDave.com in January 2010. His segment is about 40 minutes in and is worth a listen.

Note: I do not know Mikey's identity but have corresponded with him enough to believe he is who he says he is. I have read all his entries and nothing about his blog seems fantastical. But, as always, every reader needs to make up his own mind.