Dallas Cowboys and a long December

Share All sharing options for: Dallas Cowboys and a long December 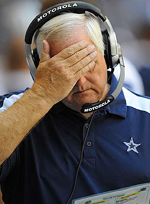 When asked at Monday's press conference about the team's routine December decline, coach Wade Philips lost his cool a bit, of course blaming the perception on the media.

No, I don't think it's a mental block. I think it's something you made up.

Made up? Hmmmm. Since Tony Romo became the starting quarterback of the team, they are 5-9 (36%) in the last month of the season; They are 31-8 (79%) in the first three months of the season. Last season they just needed to go 2-3 in December to go to the playoffs; they didn't. Just take a look at their remaining schedule this season: San Diego (9-3), @ New Orleans (12-0), @ Washington (3-9), Philadelphia (8-4). The Cowboys will have to win at least two of those games to win the division and probably need to win two to go to the playoffs.

A debate's also erupted in Dallas about whether the Cowboys are "winners."

Well, they've won eight games and they've lost four. That's where we are. I don't think we have a team of losers.

How do you define that term? Coach Phillips thinks they are "winners" because they've won more games this season than they've lost. I think they're a bunch of losers. Not a single player on the Cowboys has won a Super Bowl, and the only coach on the staff to have won a Super Bowl was back when the Cowboys were a very different team (with Aikman, Irvin and Smith). Only two players on the team ever won a BCS title, and I don't believe either of them was a starter when they did. I don't know how you call that track record the resume of "winners."