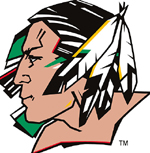 I have said for years that the fight to remove Native American-inspired nicknames from sports is the endeavor of a vocal minority of Native Americans. Now a tribe of Sioux in North Dakota is suing to keep the Fighting Sioux nickname at the Univ. of North Dakota.

"When you hear them announce the name at the start of a hockey game, it gives you goose bumps," said Frank Black Cloud, a tribal member. "They are putting us up on a pinnacle."

Good for them. And good for the other Native Americans who see the Blackhawks and the Seminoles and the Indians and the Sioux as what they are: A glorification of their ancestors and an honor.

And as I've said over and over, if North Dakota wants to become the "Univ. of North Dakota Fighting Queers," I'll welcome the recognition!

Of course, the out-of-touch New York Times calls this a "twist" because the P.C. police there truly can't intellectually understand why any Native American would be against the misguided cause of their comrades looking to undermine the honoring of their ancestors. It's just unfortunate that the NCAA has been overrun by the same vocal minority.