Player says she's off team for being straight

Share All sharing options for: Player says she's off team for being straight 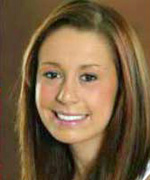 Now, here's a twist -- Brooke Heike (right), a former women's basketball player at Central Michigan University is suing the school and coach Sue Guevara, claiming she was kicked off the team for being heterosexual and not the "type" the coach wanted.

The lawsuit states in April 2007, when Guevara was hired as head coach, she met Heike. The lawsuit continues to state after the meeting, Guevara commented on Heike's makeup, saying she did not want her to wear it again.

"I could not even go into her office without her commenting on my clothes, me having a boyfriend, wearing makeup, me being a girly-girl," Heike said in a November interview with Central Michigan Life.

The school would not comment beyond saying the charges are without merit. In a statement prepared last year for a hearing on Heike, Guevara wrote that the player "consistently struggles to understand key basketball concepts."

As with any suit, it is impossible to initially determine what the truth is. Guevara had been sued and faced similar allegations during her seven-year tenure at Michigan, which ended in 2003. A former player told the University of Michigan student newspaper in 2003 that Guevara "wouldn't like it if my pants were too tight, or I wore too much makeup."

Negative recruiting has long been a problem in women's basketball. This is where a rival coach will spread rumors or gossip about a fellow coach being lesbian in hopes of influencing a recruit. If Heike is correct, then Guevara's conduct is inappropriate and unprofessional and the coach should be sanctioned. However, if there is no basis to her allegations, this will only hurt the sport and reinforce the stereotype that it is filled with lesbians determined to prey on players.