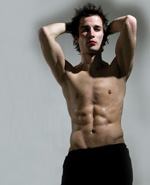 A reporter for the University of Western Ontario has done a nice job on an article exploring the issues surrounding homophobia in sports and the culture that keeps athletes in the closet. Ravi Amarnath really did his homework for this one, talking to at least a half-dozen sources (including myself), most notably an openly bisexual athlete at the University. Rob Gooch (right) is a sprinter and hurdler for the school's track & field team and, like so many others who have taken the plunge, said he has felt no repercussions from his team. Also like so many young athletes, gay and straight, today, he sees the definition of masculinity blurring:

He also talks with Luke Cyphers of ESPN and Stephen Reid, a member of the Toronto Gay Hockey Association, who said that homophobia still abounds in amateur Canadian hockey.

Oh, and for the record if you read the article, I met my business partner Jim playing flag football; I met my partner in Provincetown.