"Con el culo al aire." In Spanish it means "with the butt to the air." Some members of the Galáctico Pegaso soccer team in Spain quite nearly took it literally last week as they dropped their shorts on the field, apparently in protest of not getting paid. I say they nearly took it literally because they kept their underwear on. From what I can tell: 7 prefer classic briefs, 2 boxer-briefs and 2 square-cut briefs. Most popular color: Black, but I want to see more of the one wearing maroon. A full pic and video after the jump. 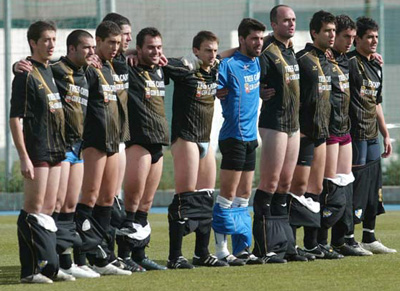