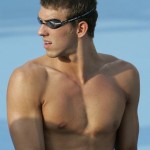 "We had a photo and him saying he was sorry for inappropriate behavior," Richland County Sheriff Leon Lott said during a televised press conference. "He never said, ‘I smoked marijuana.' We didn't have physical evidence."

Lott said he hoped children would learn that no matter who you are, you can't break the law.

"Michael Phelps is truly an American hero," Lott said. "But even with his star status, he is obligated to obey the laws of our state."

Case closed. Can everyone just take a hit and relax now? (Make sure no one has a camera, please.)