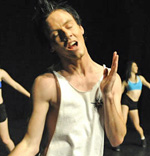 Meet Aaron Neich, 19, openly gay and the first male cheerleader for the Penrith Panthers rugby team. He was selected at an audition this weekend. One Aussie tab has already dubbed him the "Pink Panther." He is out, proud and doesn't care what anyone thinks.

"I have had it all my life, I have grown up with getting names called, if people call me a gay poof, I am and I don't care,'' he said. "If you have got it, flaunt it. Sticks and stones will break my bones but words will never hurt me, as the saying goes"

Neich said he will be "butched up" by wearing black cargo pants, a pink tank top but minus the pom-poms the women use.

"We were looking at expanding the squad and we thought why not utilize the strength of a guy," Ms Harrison said. "We're not going to put him in the cheer girl outfits, we're going to butch him up. The girls this year are in pink and they're going to be called the Pink Panthers. He's going to be in black and he's not going to have pompoms."

Penrith is a suburb in western Sydney and Neich is jazzed about being their first male cheerleader.

My guess is that Neich will become a fan favorite and none of the female cheerleaders will have to worry about him hitting on them. As for those straight fans who will mock him, he had a ready answer: "While I'm up dancing with the girls, you're sitting up there in the stands."

Video of Neich discussing being a cheerleader.
Photo gallery of the Penrith cheerleaders, including Neich.