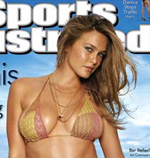 Finally, a straight man who's creeped out by Sports Illustrated's all-girl swimsuit issue. I say all-girl and not all-woman because that's Jeff Pearlman's major beef with the sexy photo spread:

Now, I just find the issue strange. The average SI reader is probably a male in his mid-40s. The average SI swimsuit model is a girl ... usually 19-, 20-, 21- or 22-years old. They almost always have breathtaking faces (and mirror-perfected come hither glances) ... with the awkward bodies of 14-year-old boys. I once went on a Swimsuit shoot with Molly Sims, and was naively shocked to see her bathing suit stuffed with "cutlets" to make her relatively nonexistent breasts pop out. In person, Molly was cute and attractive, but not someone who would stop a guy in his tracks. Truth is, most of these girls (I use the term "girls" because they're friggin' half my age, and I've earned the right to be a grumpy old man) are more alien-ish than bombshell-ish.

Final thought on the topic: Picked up yesterday's New York Post. The front cover had a picture of Bar Refaeli, the Swimsuit Issue cover girl, with a headline, AT LAST! A REAL STIMULUS. Now, let's think about this. Literally, when a straight man sees an attractive woman, sometimes the blood will flush up his penis, causing what is commonly termed an erection. That's the "Stimulus" in the Post headline. Thank God there was no real news going on ...

My solution: Be an equal-opportunity magazine and start featuring 22-year-old boys!

Hat tip to Sports By Brooks.