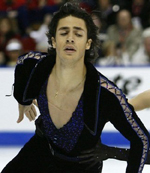 Figure skating has long been the butt of gay jokes. An organization in Canada is now saying it's likely one of the reasons that young male skaters in Canada have turned more and more to hockey instead of figure skating; Few boys want to be the targets of gay jokes. From the CBC now comes a report that Skate Canada will unveil a campaign to combat the stereotype. "Tough" is aimed to show how strong and masculine male figure skaters are. The CBC report can be seen here.

The report talks to Canadian ice dancer Andrew Poje (that's him above; tough and masculine, right?), who told the CBC that gay rumors have "always been something I've been teased about."

Figure skater David Pelletier is apparently thrilled with the new campaign because it shows what a tough guy he is.

You don't know how hard it is physically. If I can compare what a long program feels like, it's like running a 1500 meter hurdle with a smile on your face. So you go out and try that and come talk to me.

Having run 300-meter hurdles in high school and done some limited skating, I see the comparison, but I somehow doubt that figure skating is as hard as running a mile of hurdles (an event that doesn't exist). Sorry.

Regardless, a bunch of questions arise from the campaign. Is Skate Canada trying to discourage gay men from entering figure skating? Do they not want men who are effeminate? And what are the effeminate men in skating supposed to think of this new campaign that is clearly aimed at distancing the sport from them?

But the best question to ask may be, Will it work? Will showing guys tossing women into the air and catching them while skating backward transform how teenagers view a gay sport?

I wonder what Brian Orser thinks about all this.