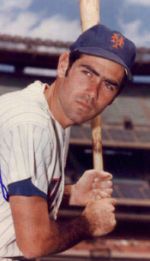 Since Mike Piazza's declaration that he's straight, jokesters and Yankees fans have had a field day labeling the Mets a gay team. And now, more fuel for the fire . . . .

Former New York Met Art Shamsky, part of the Amazin's team that won the 1969 World Series, has been embroiled in a legal battle with his ex-wife Kim, whom he divorced in 2006. Kim is suing him saying she's owned compensation for "physiological and emotional injuries" stemming from years of Shamsky cheating on her. And, she claims some of those people he was cheating with were men. She recently accosted him on 52nd Street as he came out of a lunch; You can see a video of it after the jump. And when that made her look bad she soon let out accusation that he played with their dog's nipples inappropriately.

I don't know either of these people, but Kim's antics certainly scream of desperation and nastiness. She's thrown a lot at the wall trying to see what sticks. The only thing that gives me pause is, why has he not counter-sued for defamation? Implying sex with a dog? Claiming adultery? He's hit back with court papers saying that it was she who had extramarital affairs and that's how she got HPV; That led to the public ambush earlier this month.

Kim has purchased the URL artshamskysucks.com, but no site presently resides there. One thing's for sure: No other self-respecting man would put a wedding ring on this woman, whether any of this is true or not.