Share All sharing options for: Charles Barkley takes his medicine 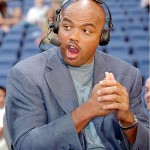 The always colorful Charles Barkley, an NBA analyst for TNT, showed this week that when pro athletes (or in his case, former pro jocks still in the public spotlight) behave badly, they sometimes do the right thing.

Barkley, busted for DUI in December, didn't hem and haw. He didn't make excuses and head for Betty Ford. He was suspended from his TV gig and on Monday, pleaded guilty. Next month, he'll sit in jail for five days. It's refreshing to see him take his lumps, say he's sorry and pay his dues. Pro jocks and people in the limelight don't do that often enough anymore.

"This is just my bad, no excuses," Barkley said in an interview with TNT colleague Ernie Johnson posted on NBA.com before he returned to work.

"I think that a DUI is unacceptable," he added. "That can't happen and I've got to challenge other people, not just celebrities or jocks. You have to really think before getting behind the wheel after you've been drinking."

Barkley conceded at the time he could face jail time.

"I think it's going to be good for me, to be honest. I need to make sure drinking is not a problem for me," he said. "I just want some professionals to talk to me about it."

Consider, too, that this is the same plain-spoken Barkley that supports marriage equality and wants to run for governor in Alabama. None of this will boost his electoral chances, which makes him all the more refreshing.