Share All sharing options for: Fifteen worst basketball uniforms ever 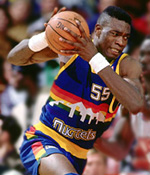 A guy over at FanIQ searched the globe to compile his list of the 15 worst basketball uniforms ever. Not surprisingly, they're almost entirely from the United States. Only two college -- Oregon and Syracuse -- made the list. Charles Barkley wore two of the uniforms in his NBA career. The biggest surprise has to be that he found two uniforms he felt were worse than the terrible Denver Nuggets "rainbow" uniforms from 1984-1992. Yikes.