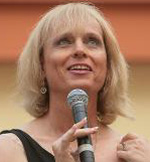 In April 2007, Los Angeles Times sportswriter Mike Penner became Christine Daniels, announcing in a column that he was transitioning to she. Last October, Daniels ditched her chosen name and became a man again, writing under the name Mike Penner. It was a confusing re-transition for many, and USA Today this week has tackled the phenomenon of transgender regret.

When Penner returned to the LA Times, I started researching this very story. I talked to a couple trans people and was told that this was not uncommon: Many people who transitioned to another gender identity ultimately switched back. Even some who have gender-reassignment surgery have deep regret over it.

What is left circling in my mind is this statement by Penner in the LA Times: "We are born with this. We fight it as long as we can, and in the end it wins." He said he fought it for years. That he was born a woman in a man's body. That he knew it since he was a kid. He was so out front on the issue, so up front on the issue. And I can't believe for a second that any of that was not true.

Unfortunately for all of us, Penner won't talk about it. He hasn't written about his transition back. He hasn't returned my request for an interview. USA Today said he never returned their request. The LA Times has scrubbed their Web site of Christine Daniels (who was writing a blog and articles for them). It's as though Penner wishes his decision in April 2007 and Daniels didn't exist. And that's too bad. He is in a unique position to spread understanding not just of these issues, but of humanity. I just want to understand a little better - not judge, but understand. Hopefully Penner will figure that out someday and share his thoughts with us.