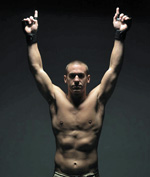 Cale Yarbrough is a University of Georgia student and mixed martial artist who appeared on Spike TV's "Ultimate Fighter." You would think this would make him popular with the ladies, but it's the guys that hit on him, his roommate told a school newspaper.

"A lot of guys. A lot of drunk guys," Yarbrough said. "A bunch of guys want to buy me beers and stuff, it's pretty weird."

"He gets hit on by tons of dudes," said Todd Duffee, his roommate.

Spencer Hall of the Sporting News says fighters should take it as a compliment.

You might take this as a bad thing, but the athletic torture of MMA training evidently makes you so irresistibly lean and sexy not even members of the same sex can resist making a pass or two at you by buying you free beer.

I am not the only one who has noticed how homoerotic MMA is, with these very fit young jocks sweatily going after each other in the equivalent of boxer briefs (check out the always hot Georges St. Pierre). Even the terms connote sex: "rear naked choke hold," "top, bottom and mounted" positions. As one gay MMA fan in Canada wrote:

An online MMA site, which features bikini-clad women prominently on its front (translation: we ain't gay), even posts what it calls "Homoerotic MMA photo of the week." Wish I had thought of it.