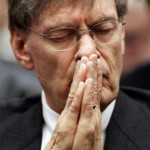 In the uproar over the salaries of Wall Street CEOs getting millions in compensation as they lead their companies into the financial toilet, this little nugget escaped attention. Until now, that is.

Bud Selig, the lukewarm baseball commish, got a $3 million raise that boosted his compensation to $18.35 million. That means he made more than just three players in the sport, a trio of Yankees with salaries at $23 million (A-Rod), $22 million (Derek Jeter) and $21.5 million (Jason Giambi), and every other head of a pro sports league.

It's just shocking to me that baseball rewards such mediocrity with such a grand salary for Selig. But then again, it's just a replay (or reflection) of what's happening in boardrooms across the country.

Don't get me wrong -- I'm not calling for the feds to intervene and set salaries for the heads of the pro sports leagues (or CEOs for that matter). But it will sting a little more in the coming weeks when I buy tickets for the season opener of the Atlanta Braves, knowing that already sky high ticket prices went up even more to pad the pockets of a commish who provides little return on investment.