Share All sharing options for: Is homophobia costing Mitcham? 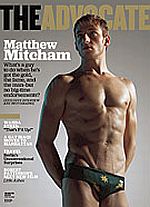 Six months after winning the gold medal in diving, Australian Matthew Mitcham still has yet to secure a major sponsorship or endorsement deal. We have written about this extensively on Outsports, but the issue came to the fore again with the profile of Mitcham in the current issue of the Advocate.

There are two schools of thought on whether the lack of endorsements stem from homophobia. We will present both cases and would love input and insights from you.

Although there has been some discussion with several sponsors, not a single company or brand has yet stepped forward to announce that Mitcham has received a major endorsement, calling into question whether his visibility as a newly minted gay icon may have hurt his chances at a lucrative deal. ...

His management team wants to steer him away from the hokey, cover-of-the-cereal-box deals so often thrown at medalists, and would prefer to focus on categories like fashion, fragrance, and luxury. They're also trying to take him beyond the gay-friendly brands one would expect to latch on to him in a heartbeat.

Point: It's not homophobia

I am not naive enough to think there is no homophobia in sports, and that some companies would be leery about using an openly gay athlete as a spokesman. This is one reason often cited for why prominent athletes don't come out. But I have yet to see proof that homophobia is what is keeping Mitcham from getting endorsements. I agree with this from the Advocate piece, which is similar to what I've been writing since the Olympics:

Marketing expert Jim Andrews, a senior vice president at leading sponsorship development firm IEG, says the lack of endorsements is not surprising. "Opportunities really are limited for most Olympic athletes," he says. "We always talk about who'll win the marketing gold, but when we go back and look at the winners, it's a pretty small group that's gotten substantial money. From a corporate standpoint, these folks drop off the radar screen [after the Olympics]. And diving is not a sport that we are tuning in to watch every Sunday."

In addition, Mitcham did not return to Australia immediately after the Games as did most other Olympians, opting instead for a two-month holiday in Europe. While getting away after such an intense training and competition phase is understandable, Mitcham missed a great opportunity from a marketing standpoint.

He is a charismatic charmer who would have been in great demand from the Australian media, from news and sports programs to talk shows. His profile would have stayed high and caught the eye of companies looking for a spokesman. Instead, he came back to little fanfare in October. In today's ultra-saturated sports environment, the Olympics were old news by then. Throw in the accelerating global financial crisis spawned by Lehman Brothers collapse in September, and Mitcham was entering a changed endorsement landscape, one where even Tiger Woods was dropped by GM.

We also don't know how selective Mitcham and his representatives have been. I was struck by this line in the Advocate piece: "His management team wants to steer him away from the hokey, cover-of-the-cereal-box deals so often thrown at medalists." If that represents their thinking, then they are making a big mistake. An openly gay athlete on the cover of a cereal box is groundbreaking, not "hokey." What an impact something like that would have had.

Until shown otherwise, I think the lack of endorsements reflect the relative obscurity of diving and unfortunate timing. In addition, the is no deadline for getting an endorsement, and Mitcham has hinted that some might be forthcoming.

Counterpoint: It is homophobia

Ben Finzel, an openly gay PR executive with Fleishman-Hillard, takes the other side. In a blog post and in e-mails with Outsports, he makes the following points.

I think Mitcham's orientation is the biggest reason he's not getting endorsements. You make a good point in your post about timing, but I think Mitcham's selection for two [major Australian] sporting honors demonstrates that his accomplishment have cut through at least a bit of limelight/profile issue you raise. And Mitcham is quoted in the Advocate article as saying that he doesn't want to be a one-hit wonder. He sounds committed to being out and engaged in the marketplace (maybe that's a change from previously as you point out). ... From the PR/marketing standpoint, I'd say homophobia is still a pretty big problem.

Andrews of IMG shares some of Finzel's views, telling the Advocate about Mitcham: "That story is exactly what you want as a sponsor. It pulls on the emotional heartstrings. You look for that. You can create a strong platform around pure performance, but most marketers want that emotional tug as well. Here's a guy who had the courage to come out. It's not easy to be out in any sport. And his win was tremendous because it was so unexpected."

We would love to hear what you think about all this, especially people in the marketing area. Is Mitcham's lack of endorsements due to homophobia, circumstances or a bit of both?