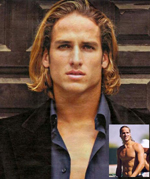 Move over Marat Safin. Take a seat, Andy Roddick. Make way for tennis' new hottest Tour player: Feliciano Lopez. Great hair, beautiful face, nice physique. The 27-year-old Spaniard has only one Tour singles title, and he has one doubles title with Fernando Verdasco. Interestingly, this past Australian Open he had played Gilles Muller in the then-longest Aussie Open match in history, until his compatriots Verdasco and Rafael Nadal's record semifinal match. He's also played doubles with Nadal, and when they are on the court together in the same uniform, it's very tough to tell them apart (see video after the jump). He's presently ranked No. 28 in the world.

He's also grabbed the attention of some with see-through Capri pants he has worn at tournaments. He most definitely prefers a jockstrap to boxers or briefs when he plays. And yes, like so many other top European athletes these days, he's been photographed naked.