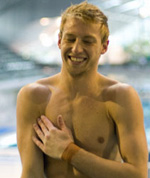 While no dollar figure was disclosed, Mitcham said it would be a "significant" help as he trains for competitions, with his goal being a repeat gold medal-winning performance in the 2012 Games in London. He said homophobia was not the reason it took so long to get an endorsement. Telstra called Mitcham a "positive role model for all Australians."

He blames the current economic crisis rather than his sexuality for the sponsorship drought but is grateful Telstra has backed him.

"I was a little bit worried... so hopefully this will be a snowball effect, but I don't want to count my chickens," he said. "If I can get the opportunity where I would be able to train without having to worry about paying the bills, that would be the ultimate goal."

For his contract, Mitcham, 20, will write a weekly blog, help launch products and make personal appearances.

The news of this is coincidental to the debate we have been having on Outsports about why Mitcham was not getting endorsements. I wrote that it was the lousy economy and bad timing that were the culprits, not homophobia. Telstra's announcement bears that out. Good for Mitcham and for Telstra. The company has a youthful, exhubrant, highly charismatic spokesman, and Mitcham has some financial freedom to focus on his training.