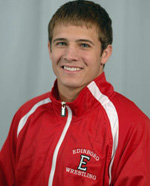 Paul Donahoe transferred to Edinboro College in northwestern Pennsylvania, a wrestling powerhouse, and he is currently unbeaten (27-0 following his Feb. 14 victory) and the top-ranked 125-pounder in the country. Donahoe won the national title at 125 pounds in 2007 at Nebraska, is 113-18 in his collegiate career and he has helped Edinboro to a current Top 12 national team ranking.

When Donahoe enrolled at Edinboro (nicknamed the "Fighting Scots") last August, he said he had two goals:

"I want to become the first two-time NCAA champ from two different schools. And I want to help the team get a trophy."

While not answering questions at the time about the Fratmen incident, Donahoe was grateful to Edinboro, saying, "I'm just really thankful they have given me this opportunity to come here and finish my career." The school's athletic director, Bruce Baumgartner, a former Olympic wrestler, defended his decision to enroll Donahoe, saying, "I'm sure we'll get some (criticism). People make mistakes all the time, and I think he deserves a second chance."

While Donahoe has been able to resume his career, I have been unable to find anything about what has happened to Jordan (one commenter below says he transferred to Purdue but is not wrestling). In the aftermath of the Fratmen incident, both wrestlers said they wanted to be reinstated to wrestle again.

I am glad that Donahoe landed on his feet. In my ranking of crimes against humanity, posing nude (especially when you look like Donahoe) falls well below the NFL's overtime rule, any kind of meat on a pizza, people who don't use their turn signal and dog owners who don't clean up after their pooch takes a dump on my flag football field.