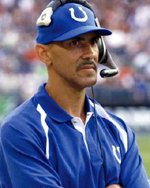 President Barack Obama has asked former Indianapolis Colts head coach Tony Dungy to be part of his Advisory Council on Faith-Based and Neighborhood Partnerships. The move has drawn fire from Americans United for Separation of Church and State, and gay people will surely raise an eyebrow over the move. In 2006, Dungy actively raised money for an anti-gay group fighting the legalization of same-sex marriage and said that gay marriage went against "the Lord's" values.

Unfortunately, people keep giving Dungy a pass on his hateful anti-gay positions; President George Bush had previously included Dungy on his Council on Service and Civic Participation. It's another reminder that our equal treatment and rights are still playing third fiddle to politics and the rights of chickens.