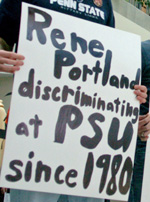 A documentary that looks at the homophobic athmosphere in Penn State women's basketball during the 27-year tenure of Coach Rene Portland will be screened this Saturday in Philadelphia. The film, "Training Rules," will show at 7 p.m. at the Ritz East Theater as part of Philadelphia Film Festival - CineFest 09. Writes Cathy Renna, a longtime friend of Outsports, in a release:

Training Rules chronicles a lawsuit filed in 2006 by student athlete Jennifer Harris against Penn State University and women's basketball head coach Rene Portland. During her 27 years of coaching, Portland enforced three strict rules: no drinking, no drugs and no lesbians. The documentary examines how a wealthy athletic department, enabled by the silence of a complacent university, allowed talented athletes, thought to be gay, to be dismissed from their college team.

Academy Award nominated filmmaker Dee Mosbacher was already involved in directing a project about homophobia in sports when she heard about the case.

"Sensing that this lawsuit would be groundbreaking and might precipitate a much-needed change in women's sports, I decided to switch gears and make a character driven, social issue documentary viewed through the lens of the lawsuit," Mosbacher said.

We have long written about the homophobia of Portland, who flatly stated she wanted no lesbians on her team. She resigned in 2007 under pressure, more I suspect from two straight losing seasons than her homophobia that had long been tolerated at the university.

For additional information, a screener DVD, or for interview requests, contact Dee Mosbacher at dmosbacher@aol.com or call 415-307-2268.

It's a pity this could not be shown in St. Louis this weekend, site of the women's Final Four.