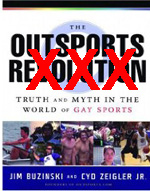 All weekend, according to Amazon.com, the writings of Hitler and sexually graphic straight novels were fine, but any gay-themed books, including "The Outsports Revolution," were not. In what the online retailer is calling a "glitch" that is being fixed, all books in the "gay and lesbian" category were removed from sales rankings and in some cases from search results.

Books such as "Brokeback Mountain," as well as sports autobiographies by out athletes Dave Kopay, Billy Bean, Esera Tuaola and John Amaechi were no longer ranked as of Sunday night. These books were listed as having "adult" content. Sales rankings numbers are vital for authors to see how books are selling and a key tool in having people find a book during a search. What infuriated me was seeing what book was listed first under a search for "homosexuality" on Sunday night: "A Parent's Guide to Preventing Homosexuality," complete with its sales rank intact.

A groundswell of outrage, concern and confusion sprang up over the weekend, largely via Twitter, in response to what authors and others believed was a decision by Amazon to remove adult titles from its sales ranking. On Sunday evening, however, an Amazon spokesperson said that a glitch had occurred in its sales ranking feature that was in the process of being fixed. The spokesperson added that there was no new adult policy.

For most of the weekend on Twitter, in conversations with the hash tag "#amazonfail," users were discussing the fact that the e-tailer was removing the sales rankings for books that it deemed featured "adult content." Many readers, and writers, decried the fact that Amazon appears to be removing the sales ranking for titles that feature gay and lesbian characters and/or themes.

Outraged authors who wrote Amazon on Sunday received this reply: "In consideration of our entire customer base, we exclude 'adult' material from appearing in some searches and best seller lists. Since these lists are generated using sales ranks, adult materials must also be excluded from that feature."

When I first saw this story I figured it had to be a joke given how outrageous it was. Now, I am not sure if I believe it was a "glitch," or whether that's the cover story for a new policy that blew up in Amazon's face and threatened to become a major media firestorm if uncorrected. I am holding off buying anything from Amazon until there is a more satisfactory answer than a "glitch."