The Voice of the Phillies is silent

Share All sharing options for: The Voice of the Phillies is silent

At right is a picture of me (wearing the Outsports cap) with Phillies broadcaster Harry Kalas, taken at the 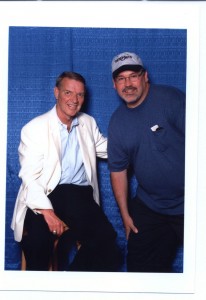 Phillies Phestival charity event in 2003. The impression I came away with from that brief meeting was that, besides being such a terrific play-by-play announcer, he was truly a gentleman in every sense of the word.

Phillies Nation mourns today. Harry died at the age of 73 after collapsing at Nationals Park in Washington a few hours before today's Phillies-Nationals game. He joined the Phillies in 1971, the year Veterans Stadium opened. Besides the opening (and closing) of the Vet and the debut of its replacement, Citizens Bank Park, as an Astros broadcaster from 1965-70 he was around for the opening of the Astrodome. He was inducted into the broadcasters' wing of the Baseball Hall of Fame in 2002.

Harry's "outta here" home run call became the stuff of legend here. Just about everyone has tried an impersonation of that voice at one time or another. As the saying goes: often imitated, never duplicated. Ironically, on Mike Schmidt's 500th career homer in 1987 at Pittsburgh, the ball left the park so quickly that Harry didn't get "outta here" into the call.

Harry loved the Phillies and their fans, and we fans loved him back. Maybe never was that more obvious than in 1980. That year, after 30 years of misery and frustration that included an epic collapse in 1964 and three consecutive playoff failures from 1976-78, the Phillies outlasted the Astros in a phenomenal NLCS to win their first NL pennant since 1950 and went on to win their first World Series championship.

In those days no local broadcasts of the World Series were allowed, as NBC TV and CBS Radio had exclusive rights nationwide. Phillies fans were denied the opportunity to hear Harry and company call what turned out to be the greatest moment in franchise history to date. They later did a re-creation for a commemorative record but it just wasn't the same. There was such a deluge of outrage directed at the Commisioner's office from Philadelphia -- and this was in the days before e-mail made for instant complaints -- that MLB changed their rules to allow local teams to do their own radio broadcasts.

Thus, after 28 more years of misery and frustration, Harry Kalas finally got to call the World Series. For real, this time. It made last year's magical postseason run all the more special, getting to hear these words, spoken by that golden voice on that cold October night..."Brad Lidge stretches...the 0-2 pitch — swing and a miss, struck him out! The Philadelphia Phillies are 2008 World Champions of baseball!"