KOTH: Vote for the Final Four

Share All sharing options for: KOTH: Vote for the Final Four 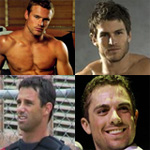 It is a guaranteed baseball vs. rugby final as two players from each sport are in the Final Four of the King of the Hardwood contest. In the World bracket, Aussie rugby players Nick Youngquest and David Williams go at it, while in the Americas bracket it is baseball players David Wright and Brad Ausmus. Go here to vote.

I voted for Youngquest (though Williams is totally acceptable), and Wright (because I think people are voting for Ausmus, a past champ, based on old photos). I suspect that had the voting not been broken down to Americas vs. the World, we might have had an all-rugby Final Four. The guys from the "Gods of Football" calendar and video are hard to top.