On-air talk about sex, sex, sex and the 'N' word

Share All sharing options for: On-air talk about sex, sex, sex and the 'N' word 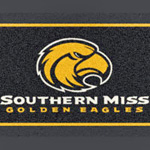 The few people who shelled out $9.95 for a webcast from Saturday's Southern Mississippi spring football on station Rock 104 game heard a lot more than they ever bargained for, including commentary such as, "What's the weirdest thing you stuck yer dick in?"

If you missed Southern Miss's internet broadcast game, you missed a graphic discussion of sex with a picnic table, having sex with transsexuals, their own low sex drives, calling out section numbers to spot hot women in the crowd, and the various shitting habits of their colleagues. ... They also use the "n-word" on air, which never goes wrong in the hands of a white dude from Mississippi on a live mike. WHEE!!!

One listener, though, heard what was going on and downloaded the feed to their computer, which guaranteed the story would spread and reaffirm every negative stereotype people have about Mississippi. Wrote an author on a website devoted to University of Mississippi athletics:

Call these boys what you want to call them, just don't call them uncommon because you know you've got a brother, uncle, or crazy old grandad that's laying down N bombs and crude sexual jokes every time he thinks nobody's looking.