Share All sharing options for: Matt Ryan, Michael Vick a study in contrasts 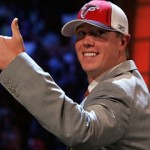 The differences between Matt Ryan and Michael Vick are pretty apparent. But it never gets tiring to see the disparities play out for the current and former quarterbacks for the Atlanta Falcons.

Consider this most recent example: Ryan spent Monday at the headquarters of ESPN shooting a new spot for the network's "This is SportsCenter" campaign. Vick is shopping his story as a reality show on the road to redemption and his $10 per hour construction job once his stay in a federal prison is up next month.

Ryan said he was impressed on his first visit to ESPN.

"Awesome," Ryan said. "This place is huge. It's cool to see how everything works. It was really great to get on the SportsCenter set and to see where everything gets done."

How nice. A humble professional athlete who knows what to say in front of a microphone.

Then there's Vick, who wants to try and profit from his prison sentence and career crash so he can escape bankruptcy. It seems, after making millions only to fight Pit Bulls in his backyard, Vick is nearly broke. Well, except for the mini-mansion otherwise known as his home in Virginia where he will finish the last two months of his prison sentence through home confinement.

That amount is only the tip of what Vick is asking for, however. He wants a high dollar figure for participation in the show, plus really needs the cash; he reportedly owes millions to creditors.

Another question is which network would be interested in a Vick reality show. Insiders place bets on A&E and Spike TV as likely first stops.

"It sure won't be Animal Planet," more than one source quipped.

To make matters worse for Vick, no one wants to buy his former Atlanta home. The 20,000-square-foot, eight-bedroom mansion didn't receive any bids when it went to auction in early March. No one touched the minimum bid of $3.2 million. (Want to see how NFL players live? View the photo gallery from the home.)