Share All sharing options for: Mitcham still puzzled by lack of sponsors 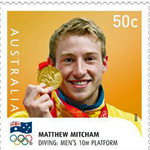 In an interview with the Telegraph of London, openly gay gold medal-winning diver Matthew Mitcham says he remains puzzled by his lack of endorsements and hopes that homophobia is not the cause. In February, Mitcham signed his only deal to date with an Australian telecom.

Although he insists he has had nothing but positive feedback from fellow athletes and the media since going public, he admits he has attracted precious little corporate sponsorship compared to Australia's other gold medalists.

"I haven't experienced any homophobia in sport but I'm hoping I'm not experiencing any in the corporate world because I haven't had any companies rushing to sponsor me," he said. "It took me a very long time to secure any form of sponsorship after the Olympics, and that's still my only sponsorship."

Mitcham's comments were more nuanced than the headline on the Telegraph, which said, "Matthew Mitcham says gay status cost him sponsorship." Mitcham was not quoted as being that specific, yet this was the slant taken by other website that picked up the story, including Pink News, which incorrectly quoted Mitcham in its headline as saying, "Being gay cost me sponsorships."

The use of language on this subject is important. If Mitcham is blaming homophobia for only having one sponsor, then he needs to say it and offer some proof. But that is not what he is saying; he is wondering aloud as to whether coming out has had a negative effect on sponsors.

I have argued that there is no evidence that homophobia has played a role. Instead, I see other reasons, such as diving's relative obscurity on the Australian sporting scene; Mitcham's decision to drop from public view for two months after the Games and not keep a strong public profile that would appeal to sponsors; bad timing with the global recession forcing businesses to evaluate sponsorships, and perhaps his management team being too picky on what it would endorse.

Mitcham is far from the only gold medalist who has not cashed in. Other than Michael Phelps, it's hard to think of any American athlete who has made an endorsement splash. And Down Under, Aussie pole vaulter gold medal winner Steven Hooker (presumably straight) is still waiting for sponsors (though some are expected) and he competes in a sport with a much higher profile than diving.

Mitcham, who finished fourth at a 10-meter platform event last weekend, has never regretted coming out and has garnered a lot of publicity and acclaim for being who he is (he won Australia's sportsman of the year award for 2008). However, if a storyline emerges that homophobia has cost him sponsors (despite any evidence to support it), this would have a detrimental effect on other athletes considering whether to come out, and reinforce stereotypes of what would happen to an openly gay athlete.

Homophobia exists in sport, yet should not be trotted out every time a gay athlete does not get what he wants (unless there is proof). The media also have a responsibility to report accurately on the issue and not use misleading headlines that paint a false picture for their audience. I would to hear your take on this.