Who will the Madden Curse strike in 2009?

Share All sharing options for: Who will the Madden Curse strike in 2009? 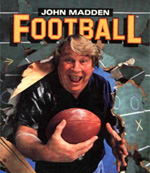 Since 2000, many of the NFL players selected on the cover of the latest version of the Madden video game have suffered cruel fates like injury, retirement or subpar seasons (List here). So I wonder if the nine finalists for this year's game cover have renewed their life insurance policies: