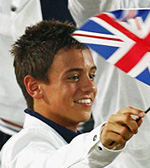 Here is a story that made my blood boil: British diving sensation Tom Daley, 14, has been forced to stay home from school in Plymouth, England, after being constantly attacked by bullies at his school.

His parents said that the bullying began when he started Year 10 in September, after returning from China [and the Olympics]. The situation became untenable last week when an older boy allegedly cornered Tom and said: "How much are those legs worth? We're going to break your legs."

Daley father, Rob, kept Tom home from school after he said school administrators refused to take action. Tom Daley was so unnerved before a big international meet last week that he stayed away from school lest his concentration by spoiled. Daley still wound up second in the meet (Matthew Mitcham finished fourth).

Tom said the bullying started after last year's Olympics and got increasingly worse.

He said: "I'd always ignored the 'diver boy' or 'Speedo boy' comments when I came back from Beijing last year, hoping they'd get fed up and stop.

"The trouble is, they haven't, and it's even the younger kids who are joining in. It's getting to the stage now where I think, 'Oh, to hell with it. I don't want to go back to school.' "...

I have fans outside school, but in school, it's the opposite - they all hate me."

The school's principal said a minority of students were at fault: "Meetings have been held between college staff, parents and Tom's friends in which appropriate strategies were discussed." Appropriate strategies? I advocate knocking these jerks upside the head a few times and gladly volunteer for the duty. Bullying is an awful thing for any young person to have to put up with and leaves psychic scars long after the victim has grown up. Rob Daley said the school has not done enough.

The bullying is severe," he said. "He has been tackled to the floor walking through the school field and in class they throw pens and pencils at him. Some have even threatened to break his legs. That was the last straw. The school has had plenty of opportunities to sort it out but it hasn't been done. It's gone way beyond mickey-taking; he has the whole school on his back and he knows that if he retaliates he will be all over the papers. It's just jealousy - it can't be anything else. I've been to see Tom's head [master] of year and also the principal, because Tom has been so upset."

It's very sad that being a national champion and Olympian with a bright future is no shield for Daley. I would have thought he would be the toast of his school, but he said he has only four friends he can depend on.

Dr Mary Brown, lecturer in psychology at Robert Gordon University in Aberdeen, said bullies were just as likely to pick on a sporting hero as a timid child.

"The bullies recognize psychological strength and are envious of it. They will also be jealous of the great deal of attention Tom has been attracting because he is talented, successful, good socially and popular. They know that someone like Tom, who also has physical strength, has learned to harness that strength and will not allow himself to be provoked into retaliating.

"There is a myth that only 'wimp[s] are bullied but the real-life evidence points to the opposite being the case."

The good news is that Daley will grow up and have an athletic career these losers can only dream of. I hope he wins the diving gold in 2012 to strike a blow for the picked-on everywhere.