Another swimsuit controversy after record set

Share All sharing options for: Another swimsuit controversy after record set 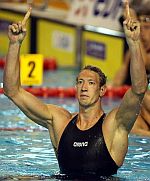 Alain Bernard in his Arena suit.

France's Alain Bernard became the first man to swim the 100-meter freestyle in less than 47 seconds when he went 46.94 in the semifinals of the French championships. His time beat the old world record mark of 47.05 set by Australia's Eamon Sullivan.

But Bernard's new swimsuit made by Arena has not yet been approved by the world swimming body, FINA, and if it doesn't get the OK, the record will revert to Sullivan. This continues the controversy over how big a difference the high-tech swimsuits make to elite swimmers. Ironically, Bernard wore his old suit in the finals and lost the race to Frederick Bousquet (who, alas, was not swimming nude).

Bernard shrugged off the controversy, saying that if the suit was not approved, he would set the record wearing something else. Though, with his body, the hottest moment came after the race when he started stripping off his suit: 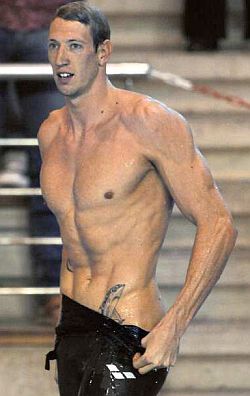