Share All sharing options for: NCAA men: It's Carolina and Michigan State 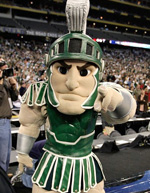 The Final Four is down to the Final Two, after North Carolina thumped Villanova and Michigan State surprised No. 1 seed Connecticut in the NCAA's men's basketball tournament. I can only hope the final is more exciting and interesting than the one snoozer and one so-so game Saturday.

There were some decent moments in Michigan State's win, especially given the raucous crowd at Ford Field in Detroit. But the game was fairly forgettable an hour after it ended. Which was at least 59 minutes and 59 seconds longer in my memory bank than the dog that was UNC-Villanova.

The most enduring memory of that game was "clank," as in missed shot after missed shot. Nova shot a putrid 33%, and UNC wasn't a whole lot better at 40%; the saving grace for the Tar Heels was their terrific three-point shooting (11 for 22), which allowed them to jump into a double-digit first-half lead that was never seriously challenged. The game had no rhythm and CBS" Jim Nantz and Clark Kellogg do such an annoying and cloying job of praising players, current coaches, past coaches administrators, fans, the band etc. that the make a boring game unwatchable.

I have written about what a lousy tournament this has been (and been upbraided by some readers). An article this week on Slate, though, perfectly encapsulated what I was feeling. Titled, "The Final Snore: A charmless oligarchy of schools has sucked the excitement out of the NCAA Tournament," it details how boringly predictable the whole event has become. Instead of one dynasty like UCLA in the late-'60s and early '70s, we have a dynastic rung of teams (UNC, Kansas, UConn, Michigan State and a couple of others) that results in a lot of sameness year in and year out. Author Charles Pierece writes about this year's Final Four:

Outside Villanova, which is playing better than anyone else at the moment, you've got North Carolina, placidly humming along like the well-heeled conglomerate that it is; UConn, which is trying to get through this tournament two steps ahead of the NCAA enforcement posse; and Michigan State, whose only chance to win this thing is to gum up the game with roller-ball defense, chuck up some three-point shots so as to have rebounds to pursue, and altogether render its games into something that makes me prefer to drive 10-penny nails into my eyeballs than watch. These are all major corporations within what has become the industry of college basketball. In the past 10 years, these four teams have combined to appear 12 times in the Final Four since 2000.

The saving grace is that there is still one more game. Last year's event was also yawn-inducing, then delivered a pulsating final that saw Kansas shock Memphis. As for me, I'm still waiting for that one shining moment.