Spurs' Ginobli out for the season

Share All sharing options for: Spurs' Ginobli out for the season 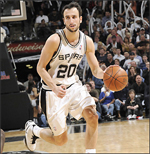 San Antonionio Spurs player Manu Ginobili is out for the rest of the NBA regular season and the playoffs.

The Spurs guard had scans done on Monday that showed his troubled right ankle has gotten worse. I had been keeping an eye on Ginobili this past season and I picked up his ankle issues. It is a telltale sign that other athletes can see and exploit.

Tests shows Ginobili had an increased narrow edema and stress fracture in his right distal fibula. The news is overwhelming for the team with the postseason just a few weeks away. Ginobli is the Spurs spark and without him it's hard to see them doing much in the playoffs.