Two states have legalized same-sex marriage in the last five days, doubling the number of states that had done it in the previous five years. Now Vermont and Iowa will legally marry gay couples, and they don't have restrictions barring non-residents from marrying. While gay people across the country were disheartened by the vote in California in November, these two states give a lot of hope for several reasons, among them: Iowa is the first Midwest state to do so; And they arrived at the laws from different angles (Iowa through courts and Vermont through the legislature). The issue is gaining steam in Maine, New Hampshire, New York and New Jersey, and the actions of Vermont and Iowa will certainly help push the debate. To help them along, the District of Columbia has also voted to recognize same-sex marriages from other states. 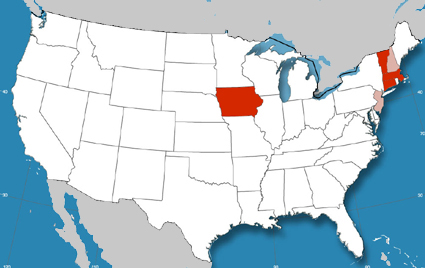