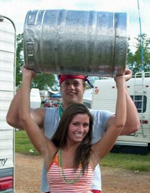 Matthew Stafford was embarrassed by this shot from a NASCAR race.

NFL teams go to great lengths to find out as much as they can about prospective draftees. From the team's point of view, they don't want to invest millions in a guy who might be a problem on or off the field. In a new twist, teams are setting up fake Facebook and MySpace profiles to see if players take the bait and reveal more than they wish, reports Charles Robinson of Yahoo.

One team posted a fake profile of an attractive woman, then got a player to add her to his friends list. Once in, the fake woman was able to view photos and read personal details about the player to see if there were any red flags.

[Minnesota Vikings GM] Rick Spielman remembers one Myspace page, the kind that makes a personnel man sit up in his seat, reach for a pencil, and push a particular question to the top of his list. He refuses to divulge the name of the player involved, but concedes that the Minnesota Vikings ran into the profile "a year or two ago." One that the Vikings looked at very closely at the league's annual scouting combine in Indianapolis, then grilled privately over some of the things he had posted on his networking profile.

"He had a big picture of a bunch of drug money and drugs on a carpet," the Vikings' vice president of player personnel said, shaking his head. "It was the kind of thing that, you know, it was under his name. So when we had some time with him, of course we were like ‘What is this all about?' ... It was an interesting conversation. He had a legitimate explanation for what happened and we followed up on it and we believe it was what he said it was. But that's one of the things that happens [with networking profiles]. ... Spielman said the Vikings, like most NFL teams, now have someone assigned to monitoring the profiles of potential picks."

With the rise of powerful sports sites like Deadspin and Pro Football Talk, it is impossible for an embarrassing photo or incident to stay quiet for long. There was the Vikings sex boat incident, the Brady Quinn photos of him dressed in Village People drag or those of him grabbing a guy's crotch, ones of Ben Roethlisberger, Kyle Orton, Eli Manning and Matt Leinart being shit-faced drunk at parties, and the one of Chris Cooley showing his penis on his blog. And these were guys already in the league.

This season's draft picks aren't immune, either. Former Georgia quarterback Matt Stafford - potentially the No. 1 overall pick in the draft - has been living down photos that where taken during a NASCAR race when a then 19-year old Stafford was captured lifting a beer keg over his head. The pictures were considered relatively harmless, but they were enough to prompt Georgia coach Mark Richt to reprimand his starter.

The lesson for players, or for anyone for that matter, is to not put anything on a social networking site you don't want the whole world to see, be it your mother, a prosepctive employer or a hot blonde who's really a middle-aged scout for an NFL team.