AfterElton has unveiled their Hot 100 for the year, and not surprisingly there are very few athletes on the list. Only three sports figures made it this year: Ben Cohen (No. 64, right), David Beckham (No. 24) and Matthew Mitcham (No. 15). According to AfterElton's Michael Jensen, Mitcham has the highest debut of anyone on this year's list. He's also the fifth-highest out man on the list (not including Anderson Cooper). The AfterElton staff speculates why so few athletes are voted in by readers:

It's interesting to speculate why more athletes aren't among gay faves, but given both the lack of out gay men in professional sports and the fact the homophobia and sports still too often go hand-in-hand, it isn't entirely surprising so few are on the Hot 100.

I don't think homophobia has anything to do with it: The number of people who see sports and think "homophobia" is now a small minority.

AfterElton is an entertainment site that focuses almost exclusively on TV and movies, so that's what their readers know and love, and the men from those worlds are whom they vote in. Musicians are under-represented on the list as well, probably because AfterElton doesn't do much with music. If Outsports readers voted on a list of the hottest 100 men in the world, my guess is half would be from sports because our readers are more focused on sports. If Towleroad or Pam's House Blend did the same voting, there would probably be more politicians on the list.

I've never heard of about 15 of the people on AfterElton's list, and my guess is most of their readers have never heard of half of the men in the King of the Hardwood contest. When mainstream magazines like Entertainment Weekly and People come out with lists like these, athletes are always few and far between for the same reasons. It's not bad, it's just whom people know about and are familiar with.

AfterElton doesn't use photos or lists to have people vote: Readers submit whatever name they like and the people with the most votes get on the list. But you tell me, if you saw these pairs of pictures and had to vote for the hotter person, whom would you choose: 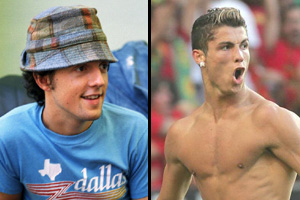 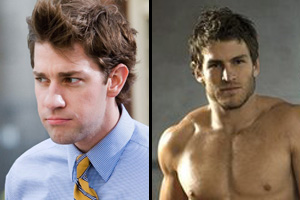