David Williams honored by King of the Hardwood title

Share All sharing options for: David Williams honored by King of the Hardwood title

David Williams, a Rugby League player from Australia, was the winner of the 2009 King of the Hardwood contest, voted on by Outsports readers as the hottest jock in the world. Run by Mariner Duck Guy, the contest mimics the NCAA men's basketball tournament and Williams beat out 63 other athletes to win the title.

Williams, 22, came to readers' attention by his being featured in the 2009 "Gods of Football," a calendar and DVD featuring hot Aussie jocks baring all to raise money for breast-cancer awareness. Williams graces the cover of the making-of DVD. Known as the "Wolfman" for his beard, Williams gave it a tight trim for the calendar.

Once informed of his winning KOTH, Williams, who is not gay, agreed to an e-mail Q&A interview with me. As you can see, he has a great sense of humor and attitude.

OUTSPORTS: David, congratulations on winning the Outsports King of the Hardwood contest! How do you feel about being voted the hottest jock in the world, beating out 63 others, including last year's champ Ben Cohen?

DAVID WILLIAMS: I'm speechless! And very honored! It's most definitely better than being crowned "King of the Softwood!" [laughs]

OS: In the semifinals, you beat out fellow Aussie Nick Youngquest? Do you think you're hotter than Nick? Who would win an arm-wrestling match?

DW: I don't know about hotter but I'm definitely hairier! In terms of an arm-wrestling match, I've got Nick covered.

OS: You shaved down your beard for the photo shoot. Do you like the new look, will you keep it and what has the reaction been from friends, family, teammates?

DW: The beard has actually made a bit of a comeback since the photo-shoot. My mum prefers me clean shaven though, and has been trying to persuade me to keep the clean-cut look. I'm not so convinced though. You can't predict what'll happen with the beard though - I like to keep ‘em guessing. Let the fans decide.

OS: You said getting naked in front of the camera was nothing new and you'd do it again. What has the reaction been since the calendar and DVD have come out? Any funny incidents?

DW: Most definitely the weirdest was a request from my grandmother for a signed copy of the calendar and DVD. You'll note that my calendar image [see below] is quite revealing!

OS: You said that having sex while watching football is a great combo. But would it be with the sound on or with some sexy music in the background, and if so, what?

DW: Turn the sound on the TV down, and crank the music right up. It would have to be either Jimi Hendrix, Led Zepplin, or maybe the man himself, Barry White.

OS: Our hot jock contest is voted on overwhelmingly by gay men. What is your reaction to that?

DW: I don't have a reaction really to the fact the voters were gay. It doesn't bother me that I have gay fans, in fact I quite like it. I'm surprised and honored that so many voted for me!

OS: Do you have any close friends or family you know are gay?

DW: Yeah, I got a couple of mates who are gay, but their sexuality makes no difference to me. They're cool guys, and that's all that matters.

OS: How would you treat a teammate if you found out he was gay?

DW: Exactly the same as I treated him before. 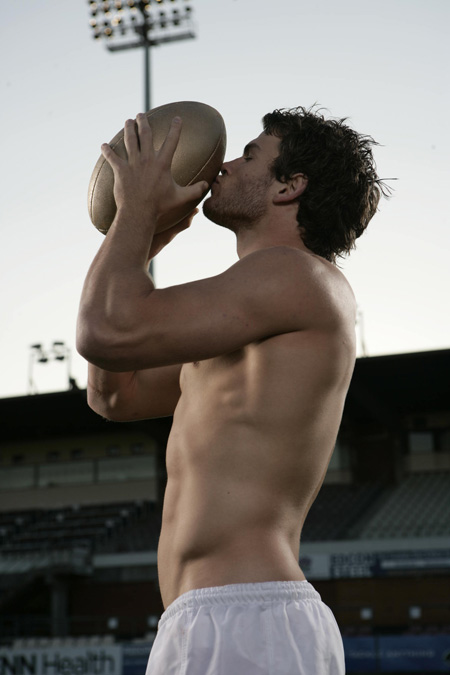 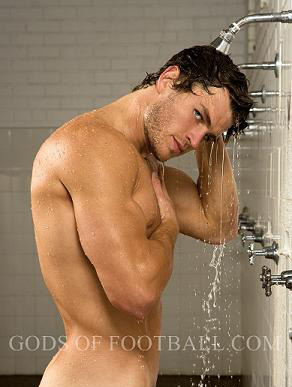