Share All sharing options for: Cristiano Ronaldo: I look pretty in pink 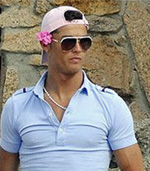 Portuguese soccer superstar Cristiano Ronaldo defended his wearing tight shorts and a pink flower behind his ear, saying he was comfortable with his sexuality. Ronaldo was seen outside a Hollywood nightclub this week sporting the pink look.

"I can see why, if you weren't comfortable with your sexuality, you might not wear it. But I'm very comfortable so it's not a problem for me. Men wear pink these days. OK, not many men wear flowers, but it's good to be different," Ronaldo told the British tabloid The Sun.

He also wonder about the obsession with his wardrobe:

I don't know why people are so interested in what I wear on holiday. Last year, when I was in LA, everyone was talking about my tight trunks. Have you seen what people in LA wear? I was the most normal dressed person over there.

Anyway, what's wrong with wearing tight pants? They look good and it's better than having tan lines down your legs.

Here, here to Ronaldo. He looks good in just about anything and I like that he tells people to bugger off if they don't like it.

Update: After I posted this, it was announced that Manchester United has agreed to transfer Ronaldo to Real Madrid for a record $131.6 million. That will buy a lot of pink flowers.