Share All sharing options for: An NBA All-Star spelling bee? 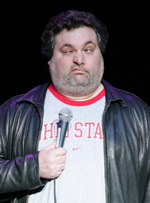 Artie Lange, from the Howard Stern show and author of Too Fat to Fish

, was on Jimmy Kimmel Live last night. Lange is a big sports fan and gambles on games a lot. Kimmel asked Lange if he was watching the NBA Playoffs (which are on the same network as Kimmel), and Lange gave a great answer. If the NBA followed his suggestion, I would plan my weekend in February around watching the All-Star game:

The NBA are a bunch of hypocrites to me. The NBA slogan, or their motto for children, is stay in school. [Laughter] Tell that to LeBron James. Hey LeBron, screw the 90 million, brush up on your biology. If the NBA really wanted to promote staying in school, and they weren't hypocrites, to me, at the All-Star Game instead of a slam-dunk contest, hold a spelling bee for the players. It'd be more fun to watch, I guarantee. What would be more fun to watch: A basketball player dunking again, or Allen Iverson trying to spell ‘receipt.'