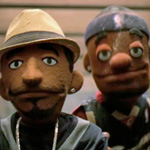 There is not much to say about the Los Angeles Lakers' 99-86 efficient dispatching of the Orlando Magic in Game 5 of the NBA Finals to give the Lakers their 15th NBA title. Game 5 was a yawner with zero suspense and it was clear the better team won. After three straight thrillers, the Lakers took control of Game 5 midway through the second period and were never threatened. Hats off to the best team in basketball.

The nice thing about the series being over is that I won't be subjected to those annoying Nike puppet ads centered around LeBron and Kobe. Maybe I'm getting old, but those ads were awful, pointless and unfunny. And they aired so much that I am much more inclinced to boycott Nike than to buy any of its products. Given my lack of pulse on the tastes of most Americans, though, this means that everyone else laughed their ass off everytime they were shown.